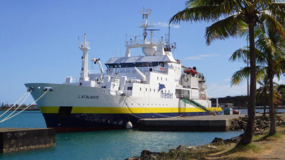 In recent years the deep-water hydrothermal ecosystem has been the subject of an increasing demand for permits and concessions with a view to undertaking mining operations. As a result, this unstable and fragmented system has also been the subject of studies to better understand the reference state of communities that are specific to it in order to assess its resilience when disturbed.

Over the course of eleven weeks thirty scientists embarked on the L'Atalante to define the patterns of spatial distribution of the biodiversity associated with the hydrothermal vents of the western Pacific and assess the degree of connectivity between populations in order to predict their future in the context of mining operations in these waters.

What were the objectives of the CHUBACARC cruise?

The aims of the cruise were to sample the hydrothermal fauna and the immediate peripheral fauna of five hydrothermal zones spread across a total distance of 5,000 km (basins of Manus, Woodlark, North Fiji, Lau and the back-arc of Futuna).

The cruise aimed to inventory the biodiversity of each zone and sample the populations of target species to determine their connectivity within and between basins. Physico-chemical conditions were determined for each site in order to better understand the role of abiotic conditions (nature of rocks, composition of fluids) on the distribution of species and colonizing processes on a regional scale (dynamic of populations, migratory exchanges).

These data will lead us to a better understanding of how the populations of various hydrothermal species are isolated, and the potential risk presented by the exploitation of deep-water mineral resources.

A secondary objective of the cruise was to discover new hydrothermal sites, in particular around the Woodlark Ridge where traces of hydrothermal processes had been picked up previously by a German cruise.

Where did the cruise take place?

The cruise took place in the western Pacific, setting out from Nouméa (New Caledonia).

The first leg toured hydrothermal zones in the basins of North Fiji and Lau, those of the Futuna back-arc.

The second leg visited the hydrothermal zones associated with the rifts and volcanoes of the Manus Basin and set out to locate the first active site of the Woodlark Ridge.

What equipment did you use during the cruise?

The vessel L'Atalante was used for the cruise and we deployed the ROV Victor. A CTD-rosette was also used on the second leg of the cruise to detect the presence of hydrothermal plumes in the water column and to collect samples for analysis aboard and ashore. Multi-tube corers were also used for sampling sediment in the area surrounding active sites in order to carry out an initial study of the biodiversity from environmental DNA.

How did you bring to the surface the samples collected by the ROV Victor?

The samples were raised using autonomous lifters or with the ROV at the end of the dive. Particular attention was paid to the sampling strategy for the three main communities (mussels, Alviniconcha snails and Ifremeria snails) and the vent fauna, in order to measure physicochemical parameters and sample fauna according to the same criteria and number of replicates across all the sites visited in the course of the two legs of the cruise.

What impact does mining have on hydrothermal resources?

Currently, considerable gaps in our knowledge prevent us from predicting the potential impact of mining on hydrothermal vents. The cruise aimed to fill in some of these gaps and produce information on the importance of certain populations as potential sources in comparison with other populations at local or regional level, or as sanctuaries or endemism zones for certain species.

It’s now three months since the cruise ended. What are the preliminary results?

The equipment and some of the samples are still in transit.

During the cruise we sampled most of our target species on the five zones visited, sorted most of the faunistic samples into species and discovered several new active hydrothermal sites including the new La Scala site on the Woodlark Ridge. The samples were sorted aboard and then preserved for study in the laboratory. We already know that certain species are very widely distributed, being found on all the sampled sites, while others have a much more limited distribution. We now need to find out whether such differences are linked to the heterogenous nature of the hydrothermal environment or specific to certain historical life traits between the species studied.

Cruise presentation by the Marine Biological Station of Roscoff